You won’t miss the meat at all in all these hearty and flavoursome dishes, in our second extract from the new vegetarian cookbook by Prue Leith and her chef niece Peta… 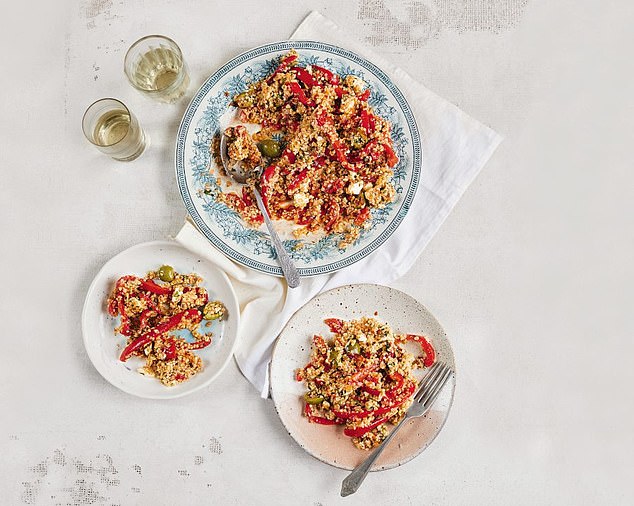 This recipe features two different types of grains, but several other types can also be added – as long as they are cooked separately according to their individual timings

The less obvious ancient wheats like bulgur, spelt, kamut and buckwheat, and grains like barley, millet, quinoa and amaranth are now foodie favourites.

Most are in supermarkets and all can be bought online. Mixed grains are a great alternative to plain rice and are good in a risotto.

You can use any mixture but if you’re using several kinds then cook them separately as the times vary. For an even easier salad, use precooked grains from supermarkets.

Preheat the oven to 200°C/fan 180°C/gas 6. Cook the bulgur wheat in plenty of boiling water for 10-15 minutes, until just tender. Drain and set aside.

Cook the quinoa in a pan of salted boiling water for 15 minutes, or until the grains start to pop their shells and you see little transparent rings appearing. Drain and set aside.

In a roasting tin combine the pepper strips with the tomatoes, garlic and vegetable oil, and season with salt and black pepper.

Roast in the oven for 25-30 minutes, until the peppers are soft and just starting to char. Remove from the oven and allow to cool a little. In a small bowl, whisk together the olive oil, harissa paste and pomegranate molasses.

Crumble the feta. In a large serving bowl, combine the cooked grains, roasted peppers and tomatoes, olives, feta, parsley, and the dressing.

Season, squeeze the lemon juice over, and toss well to ensure everything is coated. Serve immediately.