David Tennant famously talked at breakneck speed when travelling through space and time as The Doctor, but his character in new edge-of-the-seat drama Criminal couldn’t be more different.

Dr Edgar Fallon has just spent 22 hours saying absolutely nothing except ‘no comment’ to the detectives grilling him about the murder of his 14-year-old stepdaughter Nicki.

And as viewers eavesdrop on the conversation in the final two hours of the interrogation – at the end of which he must either be charged or freed – Fallon continues to stonewall them.

Can DS Tony Myerscough (The A Word’s Lee Ingleby) get him talking, prompt a confession or at least find enough evidence to charge him? Or will he walk away scot-free? 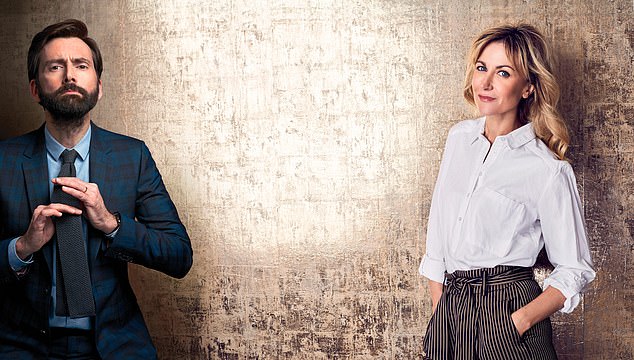 Katherine Kelly (right) stars as DI Natalie Hobbs in new Netflix series Criminal, which focuses on 12 different police interrogations. In one episode, David Tennant (left) stars as Dr Edgar Fallon, who is being questioned over the death of his 14-year-old stepdaughter

David’s episode is one of 12 in Netflix’s groundbreaking new series, each focusing on a different police interrogation.

Three are set in Britain, while the other nine feature detectives from Germany, France and Spain and will be shown with English subtitles.

The three British episodes all feature Myerscough and his team, which is led by DI Natalie Hobbs (played by Mr Selfridge’s Katherine Kelly), tackling three different cases, and each of the 12 reaches a definitive guilty or not guilty resolution at the end.

The entire series takes place in just two rooms – the interview room and the room with a two-way mirror from which the detectives monitor the interrogation, as well as the corridor between them.

We learn a little about the relationships between the various police officers involved, but nearly all the attention is focused on the interrogation itself.

‘It’s stark, stripped-down drama. That was one of the appeals,’ says Katherine Kelly.

‘That and the chance to take part in a highly believable game of cat-and-mouse involving the police and a suspect.’

Although all the episodes will be available at the same time, it’s suggested they should be watched in order because the relationships between the detectives develop over time. 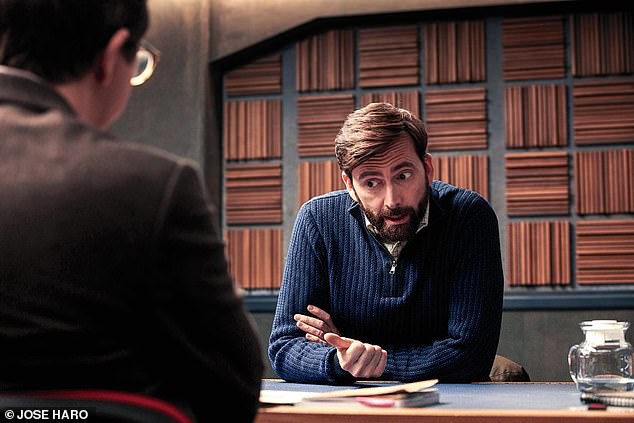 As Edgar Fallon, David Tennant (pictured) is grilled for 22 hours about sharing a hotel room with his stepdaughter who had her skull smashed into 17 pieces

Did Edgar Fallon kill his stepdaughter when they shared a room at a hotel – something they’d done many times before as Fallon ferried Nicki to netball tournaments all over Britain – or was somebody else responsible for the brutal attack that left her skull smashed into 17 pieces?

The second British film, Stacey, is more layered and concerns a young woman accused of poisoning her brother-in-law Roderick Samuels.

Hayley Atwell, who also stars as Peggy Carter in the Avengers movies, is the suspect, complete with dyed pink shoulder-length hair, garish blue nails, thick make-up and a Cockney accent.

It’s stark, stripped-down drama. That was one of the appeals. That and the chance to take part in a highly believable game of cat-and-mouse involving the police and a suspect
Katherine Kelly

The detectives must try to uncover the truth about what happened when she called on her sister and brother-in-law at their flat.

A disturbance ensued and Roderick was found poisoned and semi-conscious on the floor – but who administered the potentially fatal dose?

Episode three, Jay, is a race against time.

The main character, played by Moroccan-born actor Youssef Kerkour (Sami the Syrian in Channel 4’s black comedy Home), is accused of driving a lorryload of illegal immigrants through customs in Dover before abandoning them.

Initially cocky and dismissive, Jay slowly realises the gravity of the crime for which he’s accused.

Will he do the right thing and reveal the whereabouts of the immigrants, or continue to deny his involvement?

For Lee Ingleby, who appeared as DS John Bacchus in BBC1’s long-running period police drama George Gently – a man not averse to the threat of physical violence to coerce a confession – Criminal is a contrast because things are played strictly by the book. 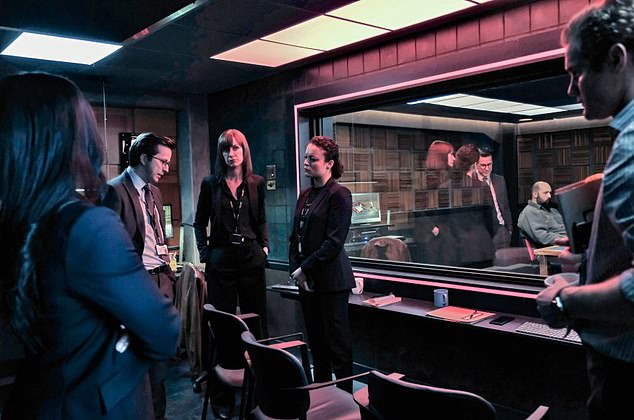 ‘Before we started filming I was reading this huge police journal that contained details of courses you can go on and vast numbers of different interview techniques that detectives are supposed to use, depending upon the circumstances of the case they’re investigating and the type of person they’re interviewing,’ says Lee.

‘There were just so many guidelines, I was getting bogged down with all the detail!’

‘The creators, George Kay and Jim Field Smith, also sent us a load of filmed police interviews from places like the US and Canada so we could see how real detectives operate in interview situations,’ adds Katherine Kelly.

Viewers will get an extremely clear view of the tiny details that will help them decide if the accused is disturbed by the question they’ve just been asked, and perhaps help convince them whether they’re guilty or not
Jim Field Smith

‘Some of them were over three hours long, but they were fascinating.

‘Although whether I’d be any good as a real detective is debatable. I’m not sure I’d have the patience.’

Rochenda Sandall, seen earlier this year as ruthless crime gang member Lisa McQueen in Line Of Duty, reckons the paperwork would be a problem for her.

‘There’s a lot of it, and actors aren’t very good at dealing with that kind of thing,’ says Rochenda, who plays detective Vanessa Warren in Criminal.

‘Learning lines is another challenge for actors and there are a lot of those in Criminal.

‘Fortunately my friends on Line Of Duty, Vicky McClure and Martin Compston, put me on to this line-learner app which feeds you all the other characters’ lines and leaves you to provide your character’s lines in between.

Given that all 12 of the dramas were filmed in the same space at Netflix’s production hub in Madrid, some crucial changes had to be made when actors arrived from different European countries.

Maps, signs and announcements on the noticeboard in the room from which the interviews are monitored had to be totally changed; even the contents of the vending machine in the corridor had to be altered to reflect snacks and drinks available in France, Spain, Germany or the UK. 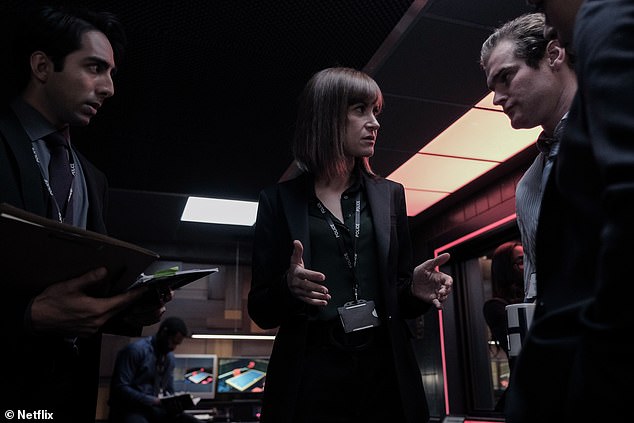 Jim revealed the key to the success of Criminal (pictured) is in the details, the series was filmed using 6k cameras for high resolution and colour depth

A drama set in such a confined space with no action scenes and an awful lot of talking was perhaps not the easiest sell for Jim Field Smith and George Kay when they first approached Netflix with the idea for Criminal.

‘It was high-wire stuff – there was always the danger that what we were creating might prove tedious,’ admits Jim.

‘The big challenge was to keep it riveting.’

But George, a scriptwriter on Killing Eve, had been confident a show like Criminal could work ever since he saw Sir Trevor McDonald interviewing an American accused of murdering his stepdaughter for a TV news programme.

‘I found myself constantly thinking, “Is this man guilty or not?”’ says George.

‘I hope viewers of Criminal will be thinking that too.

‘The way the accused’s voice kept changing, the way he shifted in his seat, the way he went from being friendly to cold and then back again – it all either added to my belief that he was guilty or started to make me think he might be innocent.

‘It was a single conversation in a single room, and I didn’t expect to be captivated the way I was.

‘I realised there was potential for a TV drama set primarily in a police interview room.’

Key to the success of Criminal is the detail.

As the detectives try to pick up clues from the suspect’s behaviour and body language, so do the cameras.

‘So viewers will get an extremely clear view of the tiny details – the telltale unbuttoning of a shirt, or the way someone sips a glass of water – that will help them decide if the accused is disturbed by the question they’ve just been asked, and perhaps help convince them whether they’re guilty or not.’

Convincing some of Britain’s most bankable stars to up sticks from rainy England and move to Spain for filming proved unsurprisingly straightforward for Jim and George.

‘I told them they’d be sitting in air-conditioned rooms with some very good actors alongside them, that I would film them nicely and in close-up and that while it would be the direct opposite of the multi-location experience they’d be getting on a show like Game Of Thrones, they would find it fulfilling,’ says George.

‘And I believe they did.’

TIPS TO LOOK YOUNGER WITH MAKEUP

How to Contour Your Nose | Make Your Nose Look Smaller