New York, 1977, and some of the Nazis who fled Germany for America after the Second World War are trying to establish a Fourth Reich by infiltrating the US government.

Out to stop them is Holocaust survivor Meyer Offerman, played with relish by screen legend Al Pacino in a rare TV foray, who’s assembled a Dirty Dozen-style squad with experts in weapons, espionage and lock-picking to take them out.

This is Hunters, a high-octane new ten-part thriller from Amazon Prime, and it’s a whole lot of fun.

‘There is an originality in this show, it’s somewhat eccentric,’ says Al, 79, one of the most acclaimed actors of his generation. 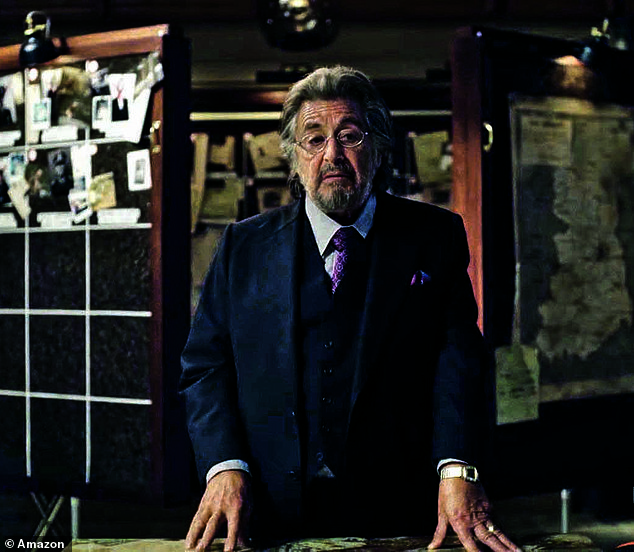 ‘You never know where you are and I loved the unpredictability of it.

‘It reminded me of the old days when I was younger and I would think, “What the hell am I doing?” I’ve never seen anything like it, and that’s why I came on board.

‘All the characters are so interesting. I normally do film, but I loved this story. My character’s past was interesting and strange and it was something I really wanted to do. It was like making a ten-hour film.

‘My memory may not be very good these days, but my memories of this are all good.’

The series begins with a young Jewish man, Jonah Heidelbaum (Logan Lerman), whose life is torn apart when his grandmother, who raised him and also survived the Holocaust, is brutally murdered in their home.

At her funeral he meets her mysterious friend Offerman, and becomes involved in the search for his grandmother’s killer.

It soon emerges that there are hundreds of Nazis living in America, and a group of them are plotting to instigate a Fourth Reich, aided by a particularly vicious young neo-Nazi named Travis Leich (British actor Greg Austin).

But as the Hunters set out on a bloody quest for justice, they soon discover that the conspiracy goes far wider and must race against time to thwart the Nazis’ new genocidal plans.

Hunters was inspired by the grandmother of the show’s creator David Weil. 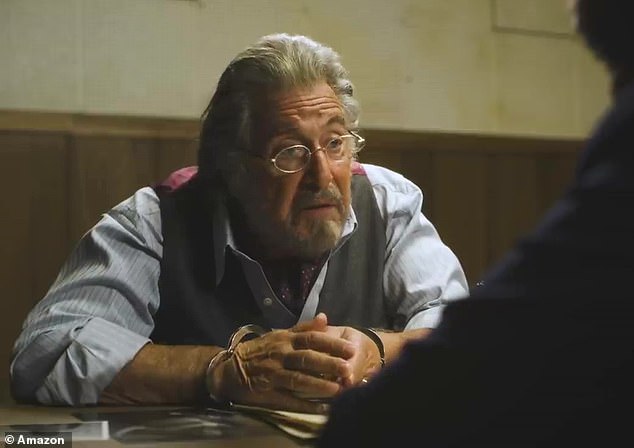 David Weil who created the series, revealed he was inspired by stories his grandmother told him of her experiences in the camps. Pictured, Al Pacino in the show

‘She would tell me and my brother about her experiences in the camps, and it felt like the stuff of comic books and superheroes,’ he recalls.

‘That’s really how I began to see the world. Growing up, I struggled with the notion of birthright and legacy and responsibility.

‘With so many survivors no longer with us, it’s for the next generation to tell the story in a certain way. This is an exploration of my birthright, to shed light on hidden crimes and truths.’

While the series is obviously far-fetched, it is based on some truth.

One of the Nazis in the show has become a top NASA scientist, and it’s a fact that NASA was willing to overlook the backgrounds of Nazi scientists in order to gain an advantage over the USSR during the Cold War.

Operation Paperclip saw 1,600 German scientists and technicians, many of them members of the Nazi party who had used slave labour during the war, moved to the US for government employment after the war had ended.

There were also attempts by Holocaust survivors to take violent revenge on the Nazis who had killed their families.

Shortly after the war, one group attempted to kill German prisoners of war by poisoning their bread, but they only managed to induce sickness.

‘I wanted to see a Jewish superhero,’ says David Weil.

‘This story lives on not in black and white, but in the grey world of murky morality. It asks the question, “If we hunt these monsters, do we risk becoming monsters ourselves?”’

But ultimately, he says, he only ever wanted to treat victims of the Holocaust with respect by making the show. ‘It’s a love letter to my grandma.’

Boxycharm Premium VS Boxy Premium February 2020! Love it or chuck it?