Queen Letizia appeared business-like in a black cape blazer as she arrived at a Climate conference in Madrid today.

Arriving at the IFEMA institute in Madrid, the mother-of-two, 47, teamed the black  blazer with a smart grey checkered pencil dress.

Letizia looked stylish as she joined Qu Dongyu, the director-general of the food and agriculture organisation of the United Nations and Luis Planas Puchades, the Spanish minister of agriculture, fisheries and food, for a meeting at the conference.

The COP25 climate change conference has become the main instrument for advancing commitments of states against the acceleration of human-induced climate change, since it’s adoption in 1992. 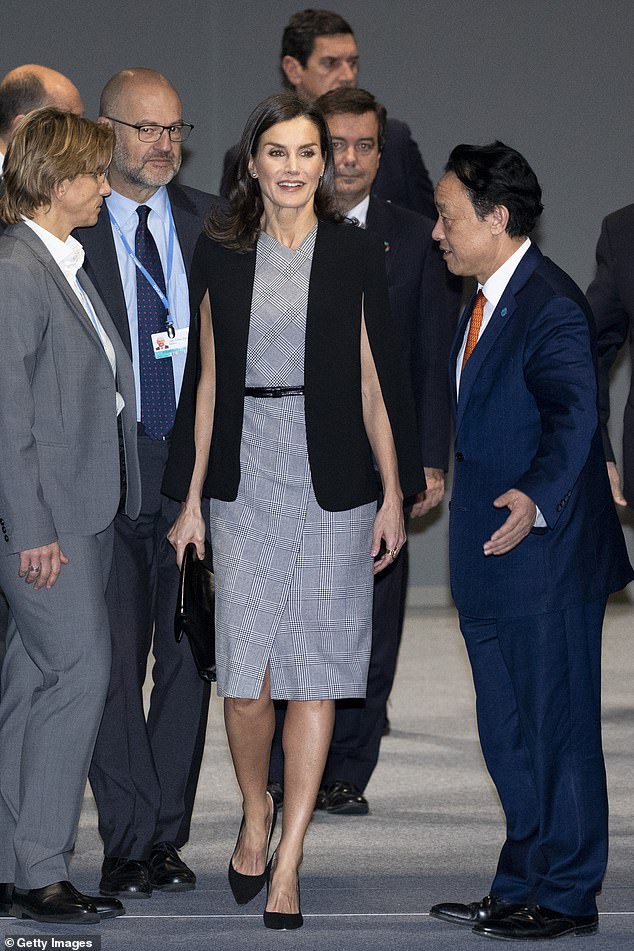 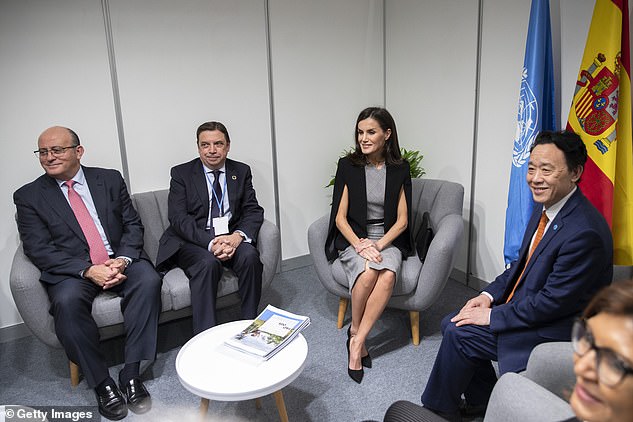 The royal joined spanish minister of agriculture, fisheries and food Luis Planas Puchades (left) and director-general of the food and agriculture Organization of the United Nations Qu Dongyu  (right) at the event

Adding height to her look, the mother-of-two sported a pair of silver slingback heels and completed the look with a skinny black belt.

Looking stylish from head to toe, the former journalist wore her hair loose in a voluminous, well-coiffed waves, while showing off a peak of her sparkling earrings underneath.

A natural beauty, the royal sported eye shadow, mascara, and a layer of black eyeliner to her look which she complimented with a light layer of bronzer and dark pink lip.

The UN COP25 Climate Summit was organised under the Presidency of Chile, along with the logistical support of the Government of Spain. 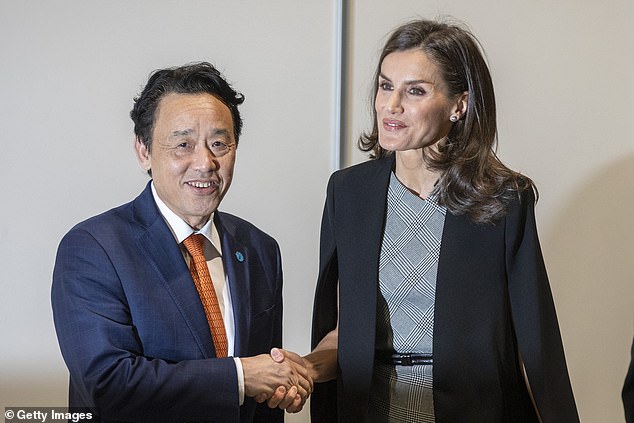 Letizia sported a minimal make-up look with a touch of eyeshadow and a sweep of light blusher across her cheeks (pictured, with Qu Dongyu) 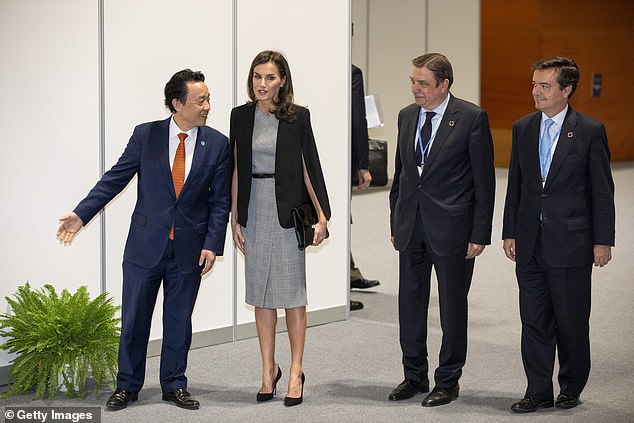 The former journalist appeared elegant in her black and grey ensemble as she attended the climate conference earlier today (pictured with Spanish minister of agriculture, fisheries and food Luis Planas Puchades (right) and director-general of the food and agriculture organization (FAO) of the United Nations Qu Dongyu (left))

The COP meet periodically to evaluate their achievements and to discuss working towards new objectives. This year’s conference was set to take place in Santiago, Chile but was moved to Madrid due to an internal situation.

Last week Queen Letizia and Felipe made remarks that urged the importance of acting now on climate change, as they warned that borders can’t stop the environmental concern. 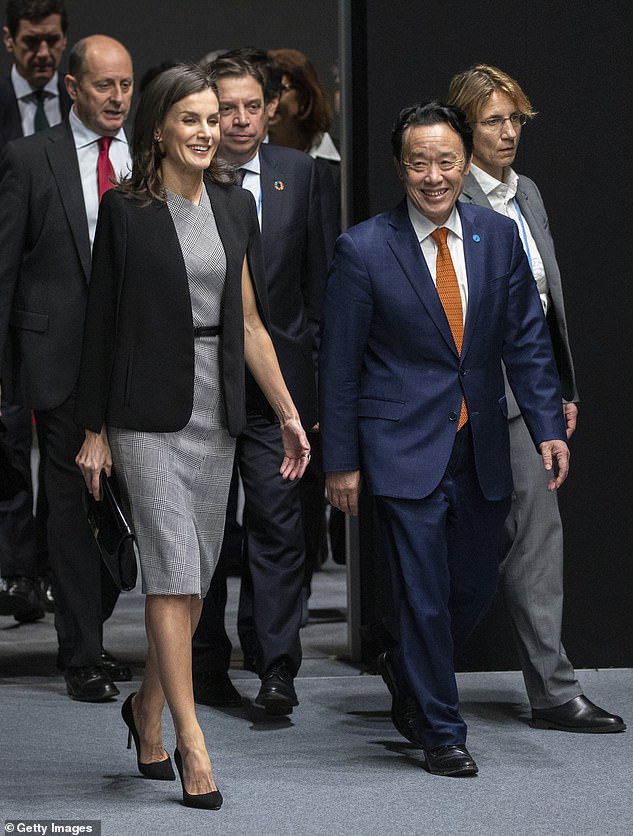 The former journalist donned a trendy black cape blazer for the occasion, which she wore over a grey checkered dress (pictured with Qu Dongyu) 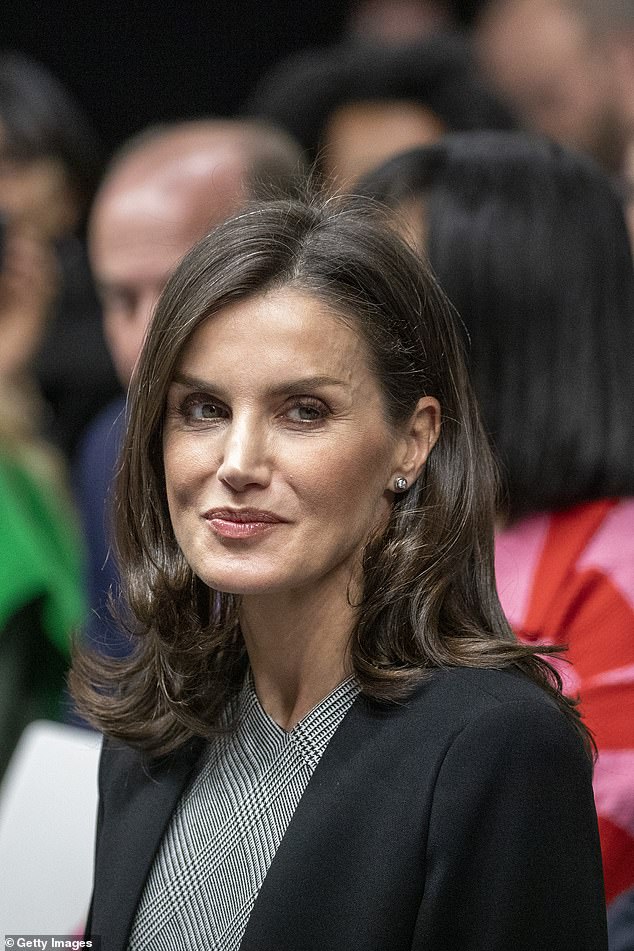 Queen Letizia wore a low-key makeup look, with a touch of light brown eyeshadow and a sweep of blusher to accentuate her cheeks 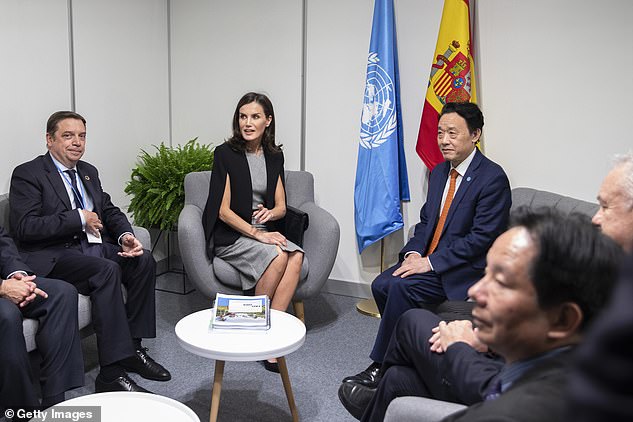 Queen Letizia appeared engaged throughout the discussions with the Spanish minister of agriculture, fisheries and food Luis Planas Puchades (right) and director-general of the food and agriculture organization (FAO) of the United Nations Qu Dongyu (left) 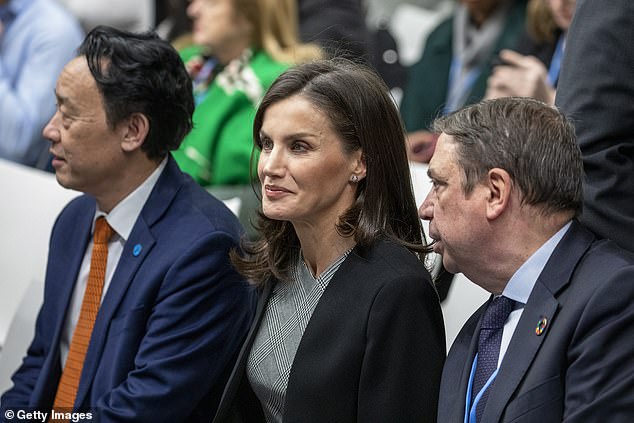 The former journalist appeared at the United Nations event solo, where she was seen discussing climate change

The Queen was without her husband King Felipe, whom she married at the Almudena Cathedral at Royal Palace, Madrid, in May 2004.

The couple are parents to Princesses Leonor, 13, and Sofia, 11.

Before marrying into the royal family, Letizia had previously worked as a reporter for the news channel 24 Horas where she held a weekly anchor position on the show Informe Semanal and also a position on the daily morning news programme.

AZTEC CLAY MASK ON 4C NATURAL HAIR | WHAT DID I DO TO MY HAIR?!

View All
Makeup Tips For Beginners

24 MAKEUP IDEAS YOU DIDN’T EVEN KNOW ABOUT

Makeup, Skincare & Haircare Empties | What Will I Repurchase? |Shreya Jain